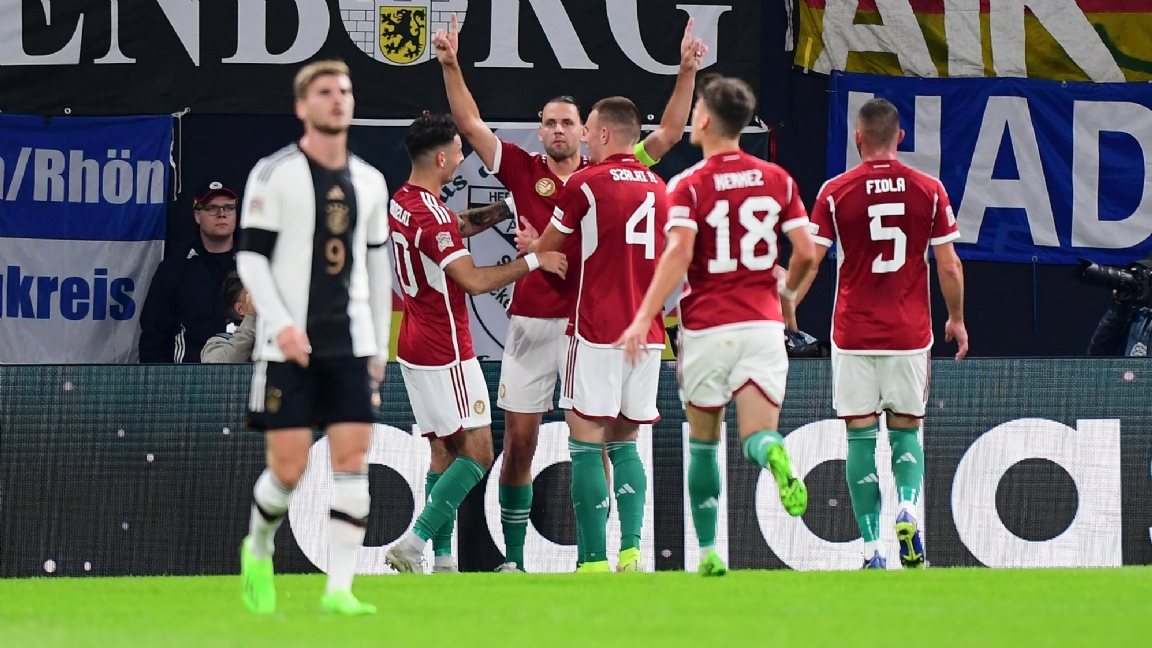 Germany surprisingly lost at home against Hungary on Friday evening: 0-1. A wonderful goal after more than fifteen minutes of playing with the heel by Ádám Szalai made the difference in Leipzig. The German formation did insist in the remainder of the match in the group stage of the Nations League, but no goals were scored. Hungary is very close to a place in the final round of the tournament thanks to the great victory in Germany. The losing country can permanently forget a ticket for that round.

In the initial phase, the Germans emphatically went on the hunt for Hungary’s target, which started defense and lurked for the counter. The Hungarians showed no awe for the four-time world champion and even took the lead at the Red Bull Arena in Leipzig. Captain Szalai converted a corner kick into a goal in the seventeenth minute with his heel: 0-1. Great joy at Hungary, while goalkeeper Marc-André ter Stegen was disappointed with the early goal.

What a ????????????! ?? Hungary continues to surprise and takes the lead against Germany in masterly fashion ?? They’re not really going to be group head in this pool of death, are they? ??#ZiggoSport #NationsLeague #GERHUN pic.twitter.com/XOUEYX1v9s

Hungary almost doubled their lead in the 26th minute, or so it seemed. Dániel Gazdag was stopped in a promising position by the alert Ter Stegen. However, the whistle had already been blown for an offside situation in the run-up to the opportunity for the Hungarian team. Germany’s attacking play did not work against the tough Hungarians, although there was almost the equalizer in the 39th minute of the Nations League meeting. Thomas Müller, however, was disappointed to see his good header defused by goalkeeper Péter Gulácsi. So a backlog for the home country halfway.

In the first phase after the break, Germany clearly gave the gas, with Leroy Sané seeing a footed shot being blocked by Gulácsi. A minute later, right-back Jonas Hofmann’s alleged equalizer was canceled for offside. With nearly an hour on the clock, Timo Werner should have done better near the Hungarian goal, but his shot wasn’t hard enough to alarm Gulácsi. After seventy minutes of play, national team coach Hansi Flick decided to bring in Kai Havertz and Jamal Musiala, with Werner and Ilkay Gundogan sidelined. Shortly after the substitutions, Martin Ádám failed to produce the 0-2. The substitute at Hungary found Ter Stegen on his way.

Szalai whipped up the Hungarian supporters who had traveled with them in the final phase, while Germany continued to hunt for the equalizer. Despite the six shots on target in the second half, a defeat at home against the stiff Hungarians was unavoidable. The score did not change in the five minutes of stoppage time. Hungary strengthens the lead in group 3 and is almost certain of a place in the Nations League with ten points from five matches. Germany drops to third place and only has no chance of taking the lead, even if England wins on Monday. The Italians have to beat Hungary that same day to still lead in the last round of the group stage.