Shot knocked out after being surrounded by group of cruel hooligans

Shot knocked out after being surrounded by group of cruel hooligans 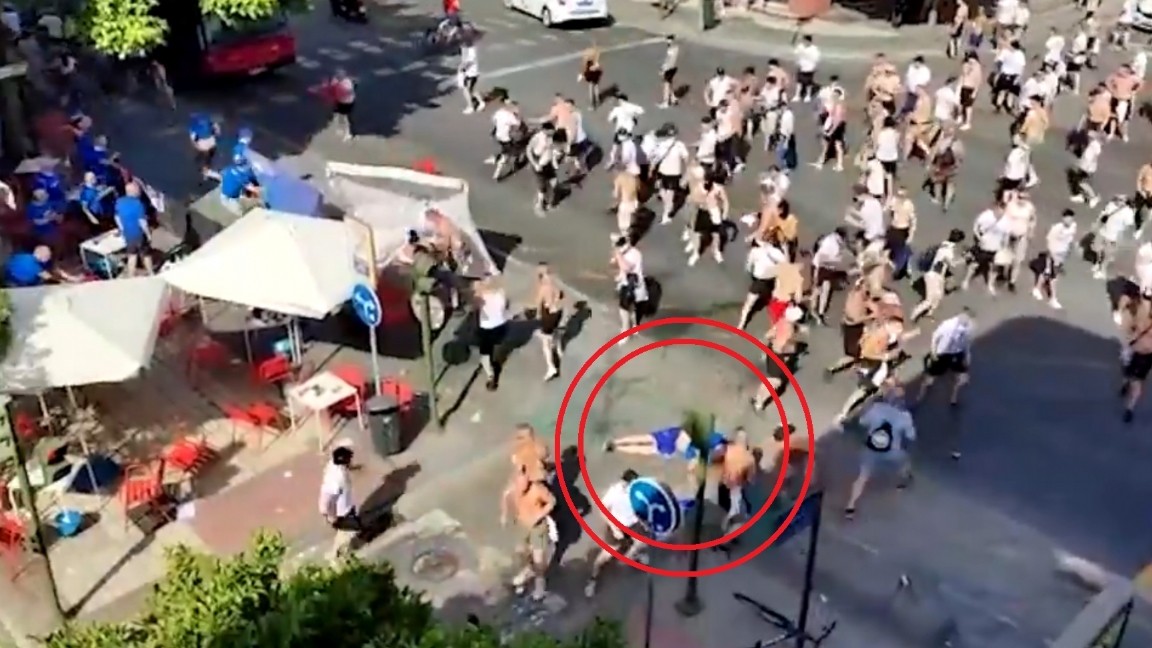 As the host city of the Europa League final, Sevilla has unintentionally become the scene of football riots. Organized hooligans from Eintracht Frankfurt abuse the final for brutal assaults against sometimes unsuspecting Rangers fans, Spanish police reported. In images from Thursday afternoon, a supporter of the Scottish club is surrounded within seconds by a group of ultras, who knock him out ruthlessly.

The said attack on the encircled fan is at the bottom of the screen from the start.

The victim remains on the ground, after which the group of attackers immediately withdraw and he is quickly pulled away by his fellow supporters. According to the Scottish Daily Record the incident took place just an hour before the game on a terrace near the Ramón Sánchez-Pizjuán stadium. It is just one example of the organized attacks by Eintracht hooligans, who have been haunting Seville since Wednesday evening. The local police were prepared for this, as the same happened earlier this season when the German club played against Real Betis in February, also playing in Seville.

Incidents have broken out between Rangers and Eintracht Frankfurt fans in Seville.pic.twitter.com/hBkQhHiQ95

Footage of the same incident filmed from a different angle.

On the night before the final, a group of Rangers supporters in Plaza de San Francisco were attacked by a group of 200 German hooligans, Seville police reported. A police intervention prevented a serious confrontation. Footage shows the hooligans fleeing after the arrival of the police and attacking passers-by on their way. Five German fans were arrested.

Mate is a Journo in Seville. Lots of videos in his group. Groups of organized Frankfurt Ultras last night roaming around looking for Rangers/Betis/Sevilla. pic.twitter.com/uD8DX4ZlqG

It is not possible to respond to this document.