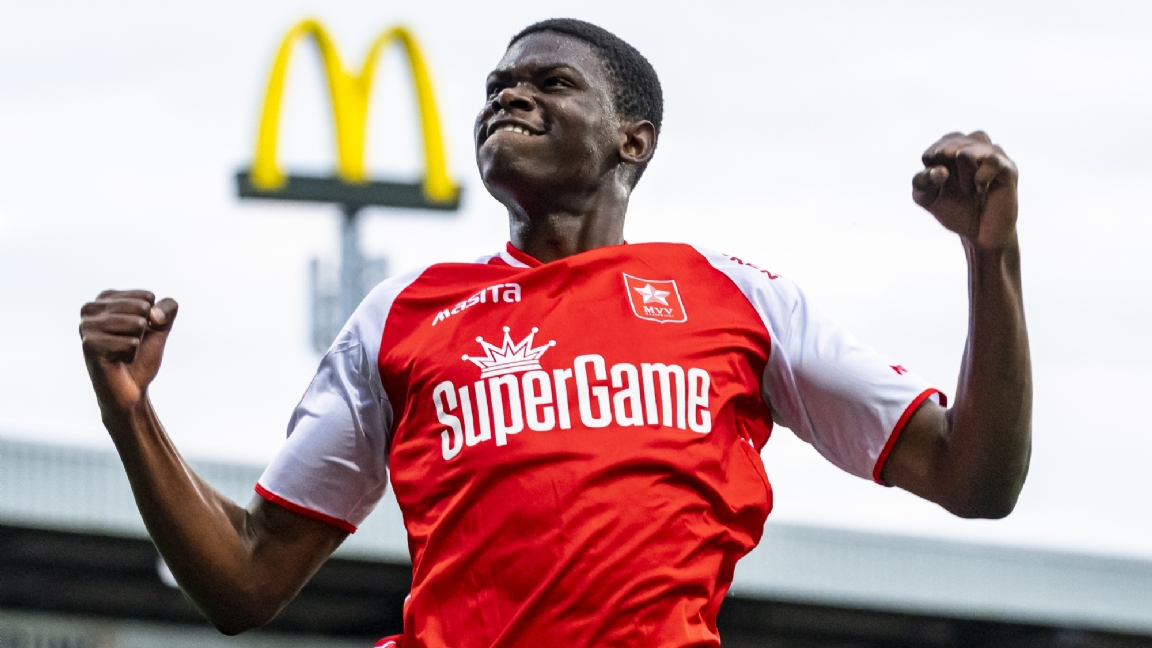 The Kitchen Champion Division has been used as a nursery for national and international talents for decades and this season too, many football players with potential are walking around on the second level. Voetbalzone, the official media partner of the Kitchen Champion Division, highlights one of these talents every week, this time focusing on Mitchy Ntelo, the goal-getter who is hired by MVV Maastricht from Standard Liège.

It was close, or Mitchy Ntelo (20) had already made the switch to the Netherlands at the age of fifteen. “Coincidentally, that was the team that MVV is not exactly friends with,” says Ntelo with a sense of understatement. It was Nicolas Anelka who wanted to bring him to Roda JC Kerkrade in 2017. The former striker of Paris Saint-Germain, Arsenal, Real Madrid, Liverpool, Manchester City and Juventus, among others, arrived in the wake of Aleksei Korotaev in Limburg, after the two got to know each other as neighbors in Dubai. When Korotaev disappeared in prison for allegedly writing a bad check, millions remained parked at a local notary and thus the Champions League ambitions with Roda went up in smoke, Anelka left Kerkrade with the northern sun.

This also put an end to Anelka’s plan with Ntelo. Anelka – who was associated with Roda as an advisor and was involved in developing the youth academy – wanted Ntelo to sign his first professional contract in the Netherlands, with the ambition to later make the switch to Arsenal. “Yes, Anelka wanted to bring me to the Netherlands when I was fifteen. That contact went through my uncle. But in the end, due to administrative problems, I did not go to Roda. I already wanted to go to the Netherlands then, but at the same time it wasn’t a huge disappointment, “explains Ntelo. In the end, he chose to exchange Zulte Waregem for Standard Liège, despite the fact that Club Brugge was also interested.

Now Ntelo still plays on the Dutch fields. “When I knew that I was not allowed to participate in the first of Standard during the preparation, I decided to look for a club to which I could be rented out. With MVV an opportunity presented itself and I decided to seize it. I was immediately convinced, I’m twenty and had to play in a first team somewhere. There was also an option in Bulgaria, but I didn’t see that as a good step for my career,” says Ntelo. It looked like a little over a year ago that he could already make those minutes in a first team at Standard. After choosing a longer stay at Standard over a move to Eintracht Frankfurt or Antwerp and signing his first professional contract, he was given the opportunity to play in the main squad during the preparation and the first months of the season. He also made his debut for Belgium Under 19, his first youth international, in September. 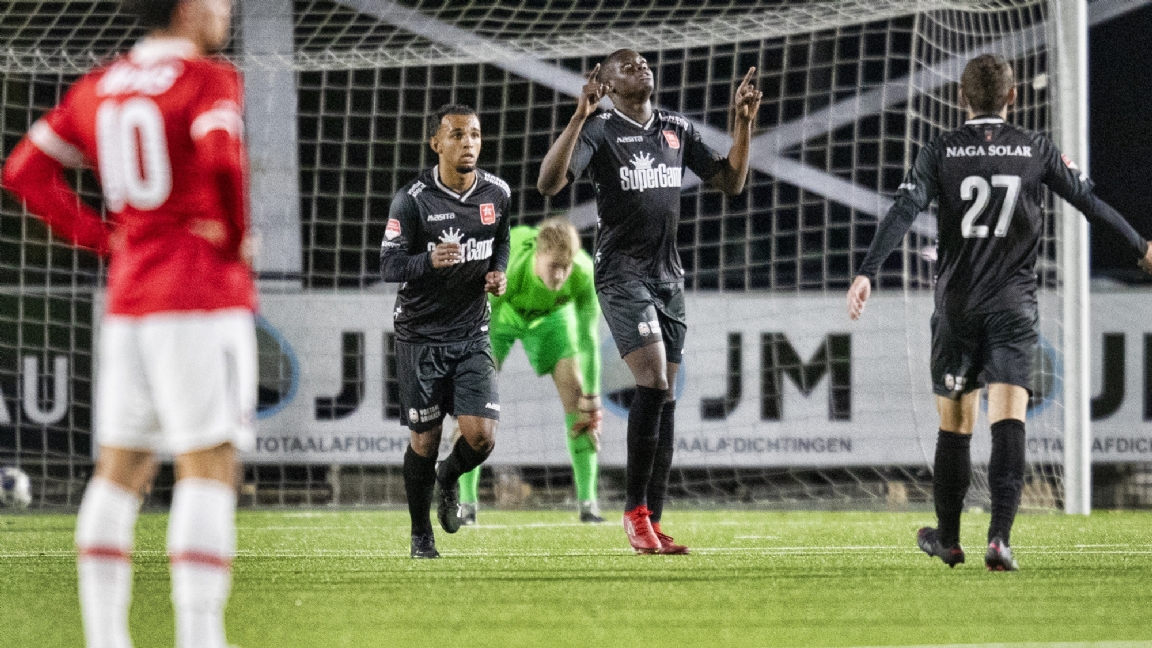 Ntelo celebrates the only goal in the match between Jong AZ and MVV (0-1).

It was actually a perfect year, concludes Ntelo. However, the fact that he was sent back to the Under 21 after a few months at the first of Standard was a blemish. “It was hard to turn the switch, I was a bit down. Mentally it was quite difficult to be patient for that. But I flipped the switch. If you work hard enough, sooner or later you will see that it will be rewarded. The fact that I now play in the base at MVV feels like a reward in that respect.” Ntelo says he did not know too much about MVV in advance, although he had heard of the collaboration with Standard. In addition to Ntelo, Allan Delferriere and Lucas Kalala are currently also rented from the Belgian club. The trio carpools daily from the Liège area to Maastricht.

“It’s not that far. It would have been no problem to live in Maastricht, because I spent years in a boarding school. I am used to being far from my family, even if it is sometimes difficult. It does make a difference that we are at MVV with more guys from Standard, that makes it a bit easier. I also speak the language and I am well received. I like it. I have what I have come looking for: playing minutes. That is going very well.” It took Ntelo only three games to establish his name at MVV. With a hat-trick, he personally secured the first home win (3-2) of the season against Helmond Sport. “It did feel good. I had dreamed of making a hat-trick as a professional football player and that dream came true very quickly. It was a beautiful moment for me and my family, it’s something special.”

In his first weeks at MVV, Ntelo also had to deal with the other side of the coin. In the 2-0 lost away game against VVV-Venlo, he hit the crossbar from close by in front of an open goal, a fragment that was subsequently repeated many times. “It was not a good time, we were also behind and it was an important game. Unfortunately it happened. But yeah, next time it shouldn’t happen again. I stand alone, free in front of the goal. Then the ball just has to go in. These are moments that you also learn from. After the game I was concerned for a while, although the coach immediately said that something like this can happen if you are a striker. But I didn’t sleep badly, no. I can put something like that behind me.”

“I am expected to get into the ball more and play together with the team. At Standard I had to move more in depth, that’s where my strength lies. You can do that here too, but you have to participate more in the game. I got used to it fairly quickly, because I am a player who also likes to be on the ball,” Ntelo analyzes his game within the MVV team. So far this season, he has scored five goals and two assists in fifteen games. “I still have to improve my positional game. It’s different when you play with a first team. The rhythm, the intensity, the training sessions: it’s all different, I had to get used to that. I have to be stronger in the duels, choose good position and read the game faster. Week after week I feel I am getting better. If I compare myself to two or three years ago, I have become a different player. Physically stronger, a more complete striker.” 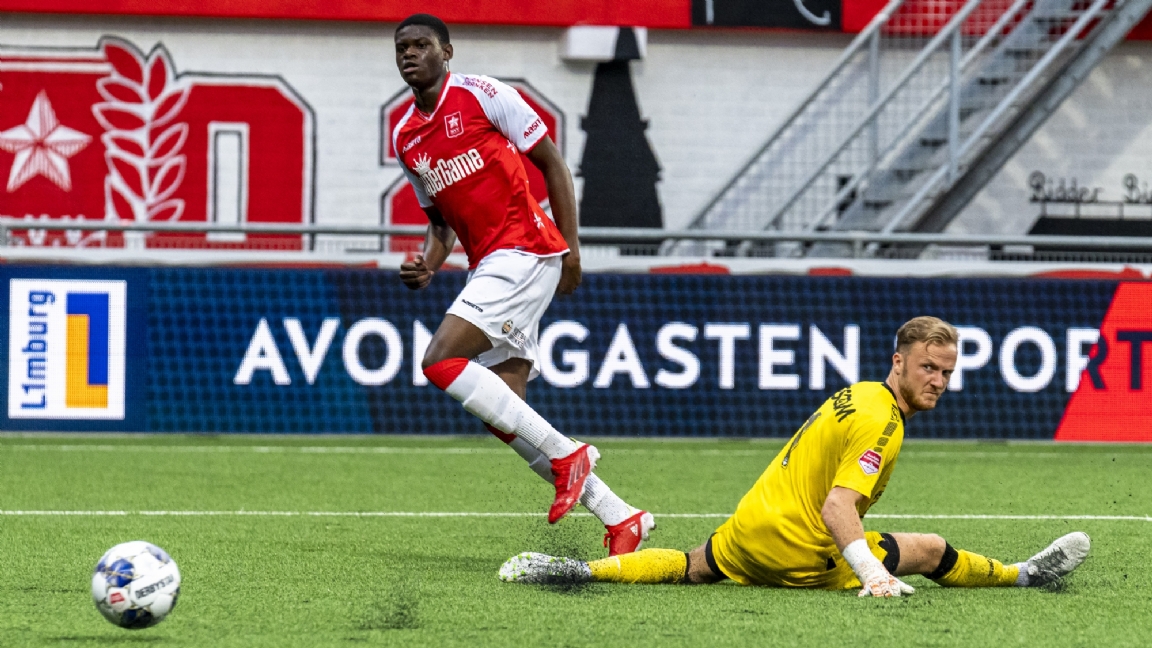 Ntelo passes Mike Havekotte and signs for one of his three goals against Helmond Sport.

The intention is that Ntelo will be prepared in Maastricht for a breakthrough in the first team of Standard. “I think there is a good plan for next season. We are in talks with the club management and we will see what will happen after this season. It’s clear that I want to return to Standard after having had a good season here and showing myself. After that I also want to show myself at Standard. I do have the feeling that I am now being prepared for that in the Netherlands. But if I have options to play in the Eredivisie, that’s no problem either.”

Before that, Ntelo first wants to reach the play-offs with MVV to achieve promotion. His personal goal for the remainder of the season is a lot more ambitious. “I am personally satisfied at the moment. I’ve already scored five times. Maybe there could have been three or four more, but for my first season in professional football I’m fine. I had said before the season that I wanted to score 15 goals. But I have now raised the bar and aim for 20 to 25 goals. That’s ambitious, but I’m going to work for it.”