Tim Zeegers is a professional football player and taxi driver: ‘I keep combining’

Tim Zeegers is a professional football player and taxi driver: ‘I keep combining’ 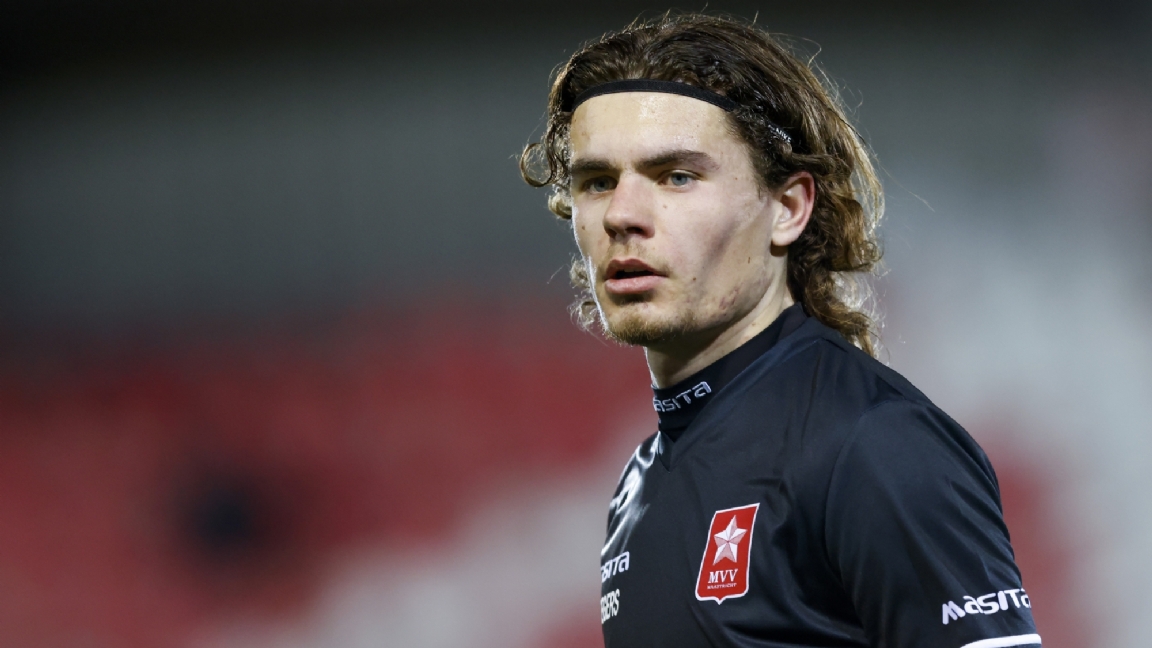 The Kitchen Champion Division has been a breeding ground for national and international talents for decades and this season there are again many footballers with potential at the second level. Football zone, the official media partner of the Kitchen Champion Division, highlights one of these talents every week, this time focusing on Tim Zeegers, who grabbed his last chance in professional football at MVV Maastricht this season.

Every morning Tim Zeegers already drives past De Geusselt. Before the 21-year-old right back reports to MVV to train, he takes children to special education with a taxi van. ‘Guys, this is where I am going soon’, the taxi driver regularly sounds as the van races past the MVV stadium on the Maastricht ring road. “But the home situation of those children makes it difficult to do a sport next to it, which also makes it difficult for them to understand what everything entails. You notice that they have very different problems than normal people. They’re having it a lot harder than I’ve been through. I could have been worse, I always think. The situation of those children is quite serious and that has causes that should not happen to a child. If I get the chance to train with the former and I don’t play, that’s not the biggest problem. They have a much harder time, let me put it this way. ” 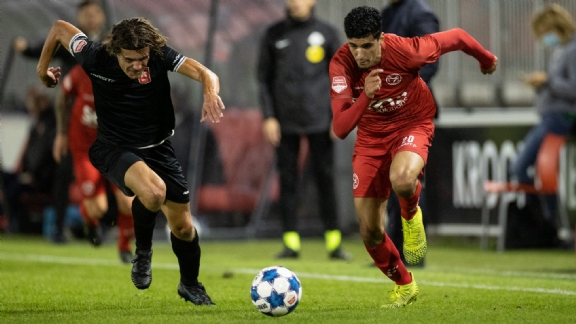 Zeegers during his first official match for MVV in pursuit of Oussama Bouyaghlafen from Almere City.

His side job taught Zeegers to put things into perspective. Maybe that’s why he started the season with a fairly sober mindset: throwing everything on football for one more season and then we’ll see where the ship ends up. He had already been part of the MVV selection on an amateur basis for two seasons, but had also sat on the bench for twenty games without playing for a minute. “The only goal I had was to make my debut. That was the first match already ”, Zeegers grins. In the away game against Almere City (0-0) on the first day of play, he immediately made his official debut for MVV as a basic player. This already made a dream come true. Zeegers grew up in Geulle, ten kilometers north of De Geusselt as the crow flies. From the moment he entered the youth academy of MVV at the age of six, the stadium was a dot on the horizon.

For Zeegers himself, it was not an unrealistic scenario that this would remain a dot on the horizon. Partly because of this, he started studying applied psychology in September. Last season, he was sidelined for months due to a tear in his meniscus, which was only discovered relatively late. “The injury released a lot of time, because I had canceled my school. But when you’re injured, everything falls away. I did not have regular or extra training, so I decided to start a study at the beginning of the season. If I got injured and there was time free, I could fully focus on that. My studies are related to my side job. The children in my van all have something that makes them in special education. I decided to do psychology to find out how those children think and how you can best deal with it. I would also like to do something with this after my football career. Not as a taxi driver, but with the children. Or in sports, because I must not forget that I really love that. ” 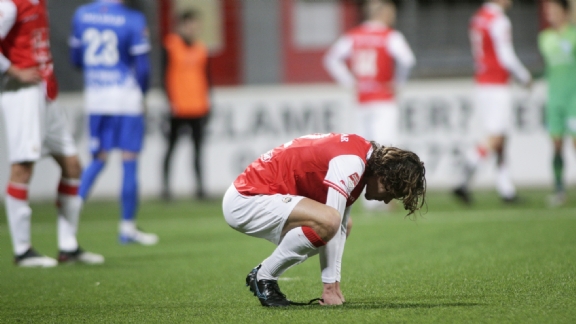 Zeegers mourns after the 2-3 home match against De Graafschap.

“Last season I had a hard time for a while, mainly because of my injury. Not necessarily less motivation, but less confidence. Now I can talk about it a little easier, because it turned out well. But I wouldn’t have been surprised if I had played less. After that moment you look at it differently. Perhaps due to corona anyway, because we have not been able to train for a long time. It was easier to be patient because the situation had changed ”, Zeegers continues. At the beginning of the season, he may have had the bit of luck that a youth player needs to break through. Zak Swanson, hired from Arsenal (‘when he came, I had the feeling that it would be difficult’) performed a positive corona test in the run-up to the game against Almere City, while his initially intended stand-in Shermar Martina due to the suspension Luc Mares was posted in the center of the defense. Later Martina was injured and Swanson eventually returned to England partly due to homesickness.

Partly because of this, Zeegers is now experiencing the year of his breakthrough at MVV. “Yes, you can certainly call it that”, he agrees with a smile. For the time being, Zeegers played 29 games this season, including 16 as a basic player. “I have played enough matches in the starting line-up to be able to speak of the year of my breakthrough. Especially when you compare that to previous seasons and what I expected, because it exceeds my expectations. ” That breakthrough resulted in the ultimate reward last week: his first professional contract. Zeegers, who has turned from midfielder to right back, has signed a one-year contract in recent years, with an option for another season.

“After playing about ten times, I had the feeling that my contract would be okay. If I hadn’t played now, I would have been at peace with it and this would have been my last season. But it has had a positive effect. Yes, I definitely took my last chance as a professional footballer. Because I am one hundred percent sure that if I had not played or been offered a contract, I would have stopped at professional level ”, it sounds realistic. His first professional contract is not an immediate reason for Zeegers to quit his side job or study. “I think I will continue to do my part-time job. For some extra income, but because of that I am also in a fixed rhythm. I plan to keep doing it for another year. It will remain the same in terms of effort, so I want to keep doing my studies. Imagine breaking my leg next season, at least I haven’t wasted a year. Because at least I was still busy with my studies.

“The days are pretty full, sometimes I have trouble combining everything. You may not expect it, but playing football costs a lot of energy on the side. You notice that as a result you cannot always concentrate properly on the study, it is more difficult for me to get started ”, Zeegers admits. Perhaps it will be even more difficult to combine when his next dreams come true. The first? Getting a PhD with MVV. But that seems to be difficult this season. A play-off spot via the league seems to have disappeared from sight, so that a starting ticket for the after-competition must be earned via a period title. “I never say never and I dare to dream of it, but I don’t expect it. If you take it, you have a very nice end to the season. ”

When his dreams come true, Zeegers eventually ends up in England. “I’ve always been for Arsenal, that would be the best thing in the end. England is a dream, in my view you have made it if you can play there on the first or second level. ” Only a possible follow-up step within the Netherlands can lead to a discussion in the Zeegers household. His father tried to raise the love for Feyenoord with the spoon, but the young Zeegers chose AZ as his favorite club. “In contrast to most children who were for Ajax or PSV. The only AZ fan of Limburg, exactly. AZ would be a wonderful step, it has always been one of the best footballing clubs in the Eredivisie. ” What if Feyenoord and AZ ever report to him at the same time? With a smile: “Then I have to talk to my father.”