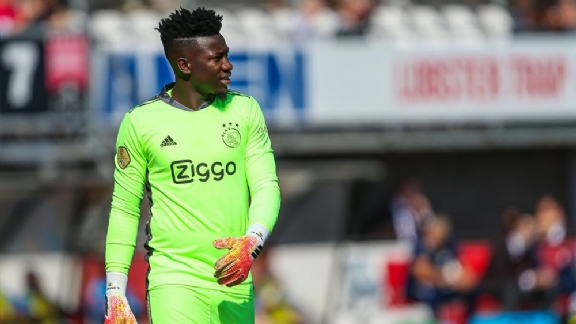 Ajax-keeper André Onana caused a lot of irritation at Sparta Rotterdam on Sunday by regularly stalling. After Nicolás Tagfliafico’s red card after playing for less than half an hour, coach Erik ten Hag’s team got the lead via Antony, after which Onana took all the time at dead play moments. According to the calculations of the Algemeen Dagblad has cut Onana a total of 6.08 minutes of total playing time. The newspaper therefore calls the goalkeeper ‘King Time Stretch’. Referee Jochem Kamphuis punished him in the final stages with a yellow card, but according to former referee Mario van der Ende that punishment should have been handed out much earlier.

The newspaper emphasizes that it’s about gross playtime, because Onana couldn’t do anything about a VAR-check and a change of Sparta. In addition, the game does not immediately continue when a player of Sparta shot over or next to the goal. Still, after Antony’s goal in the 38th minute, Onana usually did half a minute each time over a goal kick. The Ajax goalkeeper also took all the time for a catch, while the rule is that the ball must be out of the hands within six seconds. If this didn’t happen, the arbiter could give an indirect free kick, but Kamphuis also failed to do so. It was not until the 87th minute that Onana turned yellow when he refused to tackle the ball, which Sparta defender Tom Beugelsdijk offered. That moment was indicative of the whole situation, says Van der Ende.

“A warned man counts for two. The referee has missed a great opportunity for a reprimand or yellow card. This allowed him to minimize time stretching and promote the viewing game. If Onana ignores that, the consequences are for him. Now that card only has an administrative value and no preventive or clear value,” he says in the newspaper. Former goalkeeper Joop Hiele understands that Onana tried to stall as much time as possible. “Will we become European champions next year, everyone says: Gee, what a good thing our goalkeeper did for the game. I was also stalling if I could. I was never taught that by a coach. That’s what a goalie who can think a little bit just does. The referee sets the bandwidth. He allowed it. I thought Onana started early. Bijlow did it against PEC once. When they do it abroad, we call it professional, but here it’s weird. I understand, especially if the umpire allows it.”

Van der Ende thinks that Kamphuis should have performed much earlier. “Onana is now clearly taking advantage of the arbitrator’s inadequate action. That happens when you don’t have the superiority as a manager. Then you are being fooled on all sides,” he says. Arbitrator Dick van Egmond does not want to go into the case of Onana and Kamphuis in front of the newspaper, but says that fighting time stretching is a priority for the KNVB. “We want it tackled and the lost minutes pulled in. That’s not being applied properly everywhere. That’s why it’s got our attention.”