Emotions of André Onana shoot in all directions in television interviews Emotions of André Onana shoot in all directions in television interviews

André Onana wants to leave Ajax transfer-free after this season. The goalkeeper made his comeback in the starting lineup against Besiktas (1-2 win) on Wednesday evening, but those playing minutes apparently did not make him doubt. In an interview with RTL 7 announces Onana ‘wants to ‘close the chapter’ and ‘want to look further’. He looks emotional, as in a later interview with Ziggo Sports.

With his refusal to extend his contract, at a time when Ajax was doing everything in its power to challenge his suspension, Onana has angered many supporters. “Of course. Of course I understand that,” says the goalkeeper about the dissatisfaction among the fans. “I respect everyone’s opinion. For me it was important to… How am I going to say this? If you open a door, one day you have to close it. Maybe the time has come for me to leave. I did my best for this club, I did everything.”

“We have achieved a lot. And when I look at the photos of the year of the Europa League: I think I am the only one who is still there (Davy Klaassen returned later, ed.). Sometimes I say to myself: wow , that was a great season. But especially after what has happened, it is good to make a new start and look forward,” says Onana. “I’m happy to be here, but it hasn’t been easy either, so I want to close this chapter now and look further. Whether the next chapter is Internazionale? No, the next chapter is Ajax, because I still have a contract here . We’re going to see what happens.” 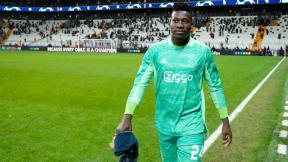 It was hard for Onana to be out of circulation for ten months. He was caught using the banned substance furosemide, which he says was a paracetamol. “It was tough, but this is part of life. You have to survive, be strong and always look ahead,” says Onana. “I tried to stay positive. It wasn’t easy for me and the people around me. It was difficult to explain how this happened to someone who never drinks and never smokes. Especially towards my parents it was difficult. somehow you have to learn to deal with the situation.”

In an interview with Ziggo Sports Onana is constantly moving back and forth, weighing his words and looking mentally charged. “It was tough, because I knew four months in advance that the suspension was coming,” the keeper looks back on the months before the suspension was announced on February 5. “I still had to play matches. I had a conversation with Marc (Overmars, ed.), Edwin (van der Sar) and the trainer. They said: André, this is the situation and you will have to deal with it. So I played knowing I’d be out.”

Onana suspects that he is in his last season in Amsterdam service. “It looks like that,” he agrees. He knows nothing about an oral agreement with Internazionale, which according to Fabrizio Romano has been concluded. “You know what the problem is? The problem is that the press usually informs me about my own life. I have a contract with Ajax, right?” A little later, a little more concrete about the so-called agreement: “That’s complete bullshit. Bullshit. It’s bullshit.” In the studio, Wytse van der Goot concludes that the ’emotions are shooting in all directions’ in the interview. The presenter calls it an ‘impressive’ conversation. “He did something very stupid,” Rafael van der Vaart adds. “How it went is dramatic for a player, especially if it was really as innocent as he says. Then you have thrown away a year of your career.”