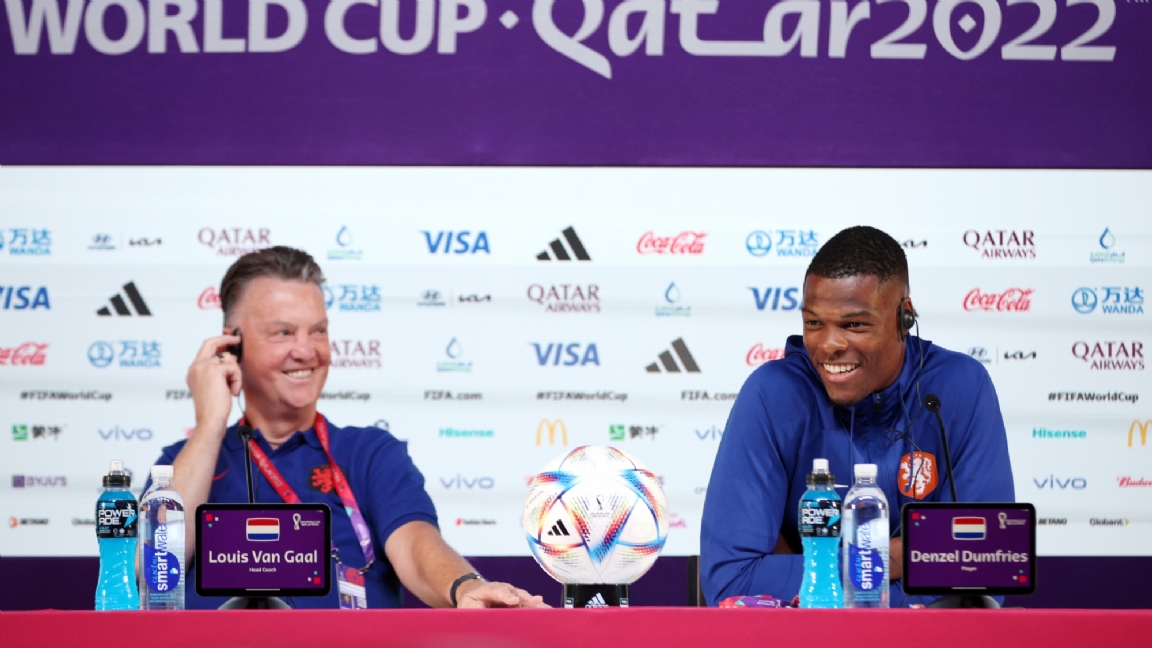 Where Steven Bergwijn received a lot of criticism for his attitude after the the Dutch press conference on Wednesday, Denzel Dumfries has the laughs a day later (Thursday afternoon). The 26-year-old right back of Internazionale made a cheerful impression alongside national coach Louis van Gaal and even got the entire press room in Qatar laughing.

The spectacle between Van Gaal and his pupil started immediately with the first question about the expectations of the match against Ecuador. “Shall I start, Denzel?”, after which Dumfries nodded approvingly. “I think Ecuador is an opponent that is even more organized than Senegal. The players are even smarter. So that makes it more difficult than against Senegal,” said van Gaal, who then added in a hilarious way. “Denzel, you have something to say too!”

“Of course I agree with the national coach,” said Dumfries, who received a pat on the back after his words, and then made the audience laugh. “That also seems sensible to me, haha! Of course Ecuador also has a good team. They showed that during the match against Qatar (0-2 win, ed.), but also in qualifying. It is a physical team and we know what to expect.”

Ajax player Bergwijn received from journalists The Telegraph and NOS much criticism of his laconic attitude towards the press. Valentijn Driessen in particular lashed out mercilessly at the 24-year-old winger. “It is just pure contempt for journalism and the Dutch follower. Everyone forgets that: we are not there on our own behalf. We are there on behalf of the Dutch people to inform them about football. Then you just expect an adult answer. And not that sheepish stuff we’ve seen now. This is also an outright mockery for the KNVB.” The reactions to Dumfries’ performance will probably be a lot more positive.

Should Steven Bergwijn change his attitude towards the press?