After Ajax and Vitesse, Paul Fosu-Mensah is now aiming for a breakthrough in the Netherlands

After Ajax and Vitesse, Paul Fosu-Mensah is now aiming for a breakthrough in the Netherlands 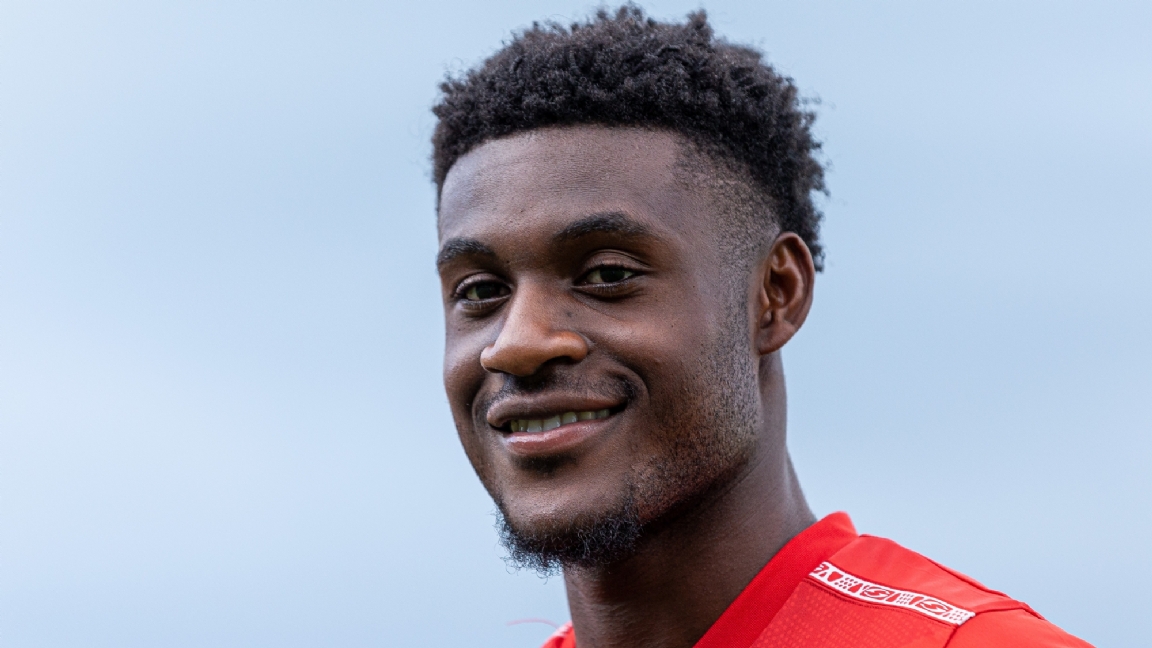 The Kitchen Champion Division has been used as a nursery for national and international talents for decades and this season too, many football players with potential are walking around on the second level. Voetbalzone, the official media partner of the Kitchen Champion Division, highlights one of these talents every week, this time focusing on Paul Fosu-Mensah, who hopes to break through in professional football this season at Helmond Sport after a difficult year without a club.

They have contact every day, via WhatsApp or FaceTime. Alfons Fosu-Mensah in England, Timothy Fosu-Mensah in Germany and Paul Fosu-Mensah in the Netherlands. “My brothers really help me a lot, we talk to each other every day. About every situation. We try to push each other, keep each other mentally strong and improve”, says the youngest member of the football brothers. “I used to go to Manchester for a weekend here and there, or where Timothy played. Then we were there with the whole family to watch his match or to visit. If he had a weekend off, he would come back to the Netherlands. You may not see each other physically most of the time, but you do have daily contact and you are still connected.”

For a long time it seemed that Fosu-Mensah was destined to reach the same podium as his three-year-older brother. At the age of eight he was taken away from the amateurs of Zeeburgia by Ajax. He was part of an extremely talented group at De Toekomst. “Ki-Jana, Kenneth, Jurriën, Ryan, Brian, Denilho”, Fosu-Mensah sums up the former teammates with whom he is still in contact. “Many good players who are now playing at the top of Europe. I look at them with pride, it’s really nice to see. It was a great time, I enjoyed it at Ajax. Really enjoyed. A good education, in which I played with good players and experienced many great moments. Yes, a really great time.”

Where his former teammates moved on to the first team or a foreign top competition via Ajax, Fosu-Mensah had to leave when he was seventeen. “I’m realistic, I had good competitors at Ajax and I came back from a cruciate ligament injury. Ajax chose to continue with those other guys and in the end you have to respect that choice. It’s just going on,” he puts it into perspective. At a young age he had to deal with physical setbacks. “I tore my cruciate ligament at a very young age. From the age of twelve I had to play with a brace for three years, due to medical reasons. Those are moments where you think afterwards: if only things had gone differently. But life goes as it goes. I am realistic, everyone has their own path. One is a bit faster than the other.” 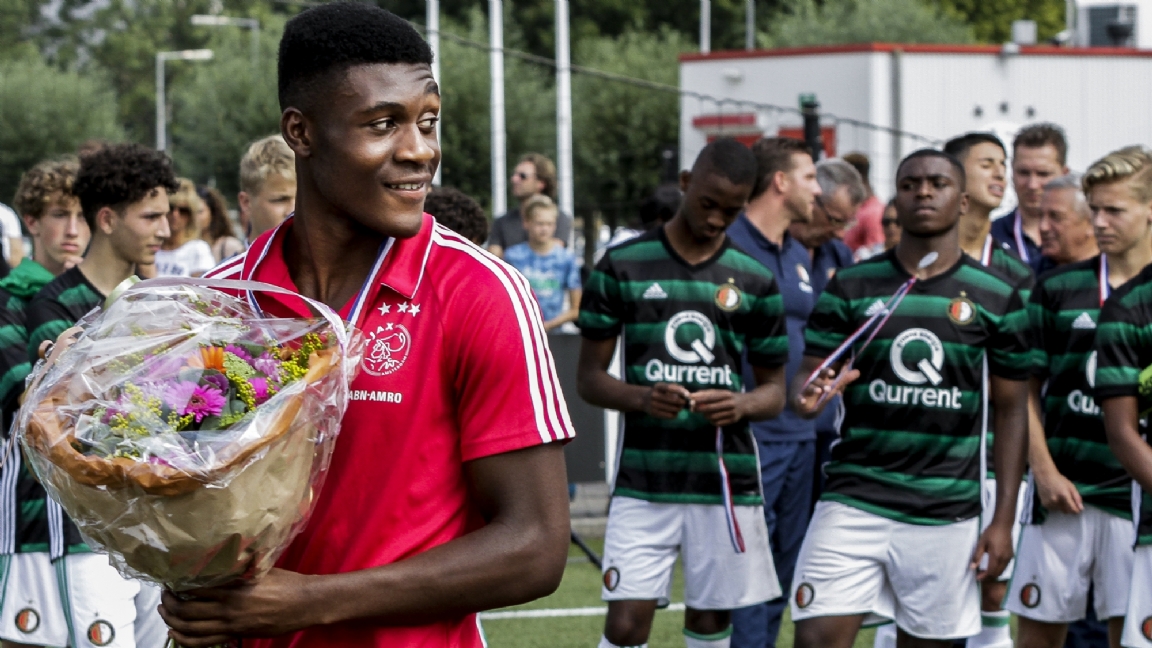 “It was a great time, I enjoyed it at Ajax. Really enjoyed it.”

His knee also got in the way shortly after his departure from Ajax, when he was allowed to complete an internship at Fulham. “During my internship I suffered a meniscus injury, then you are out for three months and it is difficult to find a new club. The teams have already been formed and I also thought: let me take all the time to rehabilitate well, so that I can come back as a stronger and better player,” says the twenty-year-old defender, who can play both in the center and at right back. . A year after his departure he found shelter with Vitesse, but his stay in Arnhem was limited to one year.

“I certainly do not regret my choice for Vitesse. I make my choices with full confidence, so I have no regrets. It was a pity that I left there soon. It started well, but unfortunately I got less playing minutes at a certain point and corona came on top of that. From there they made a choice. Then you can complain, but in the end that choice is made and you just have to look further. The past no longer counts.” Again he had to look for a new club, only this was more difficult than a year earlier. Due to the corona pandemic, many times more football players were left without a club. 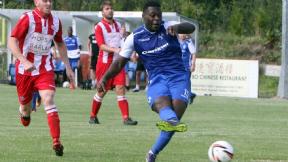 “It was a frustrating period, a tough year. I love football and wanted to be able to call myself a footballer again”, sighs Fosu-Mensah. In the meantime, he was given one opportunity to get back to work, in the form of an internship with Greenock Morton. However, it ultimately did not come from an employment contract in the Scottish Championship. “Yes, at a certain point I started to have doubts. Fortunately, my education works in my favor, I have earned that myself. But still: there are a lot of good players still clubless. I had to train a lot for myself with personal trainers and physios. But luckily I came out okay. I don’t really like sitting still. It starts to itch when I have to sit still for a long time, so I’ve had no qualms about going for it every day.”

Fosu-Mensah didn’t hesitate for a moment when he got the chance to do an internship at Helmond Sport towards the end of last season. He made such a good impression that he was allowed to come back during the preparation for this season and ultimately earned a one-year contract with an option for another season. “I was comfortable in the training sessions, I had a good feeling about it. Fortunately, it was also the other way around. You have to be realistic, they can always choose an experienced player or someone from the neighborhood. I am grateful that they chose me and that I was allowed to continue here. I like it. Everyone was friendly and helpful, from day one it felt like I was there longer. I am glad I made this step.” For the time being, Fosu-Mensah still has to make do with a reserve role at Helmond Sport: he has made three substitutions so far. 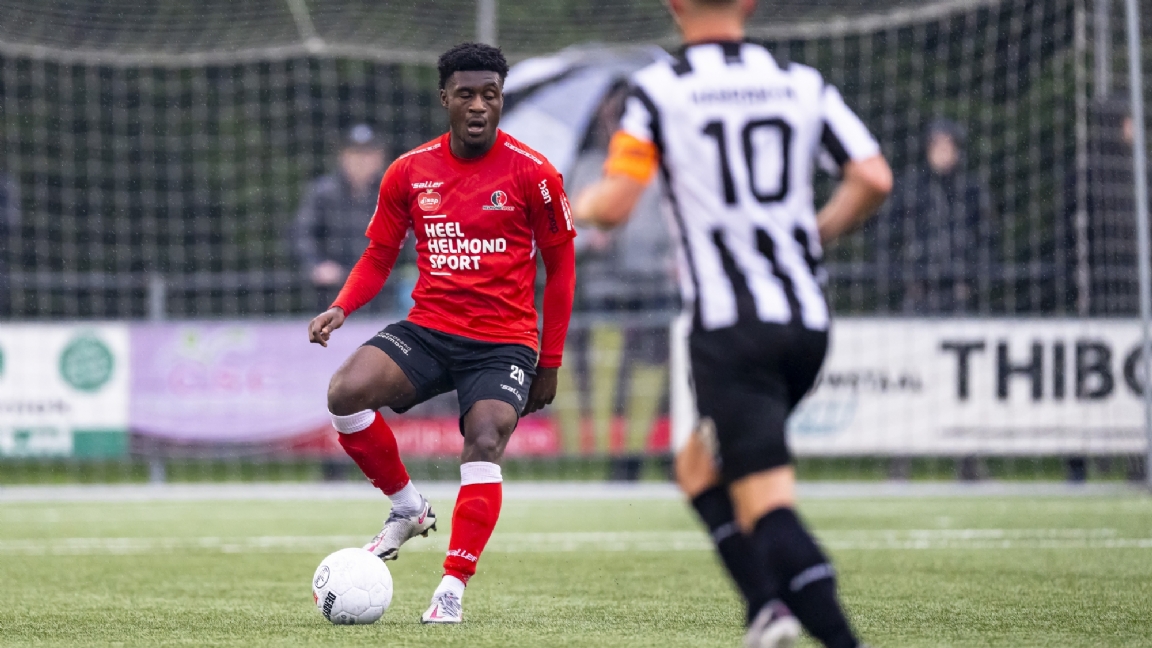 Fosu-Mensah played 33 minutes spread over 3 matches for the time being.

“I am patient, my relatives keep me calm. I make steps, especially in terms of fitness. But also in my game, it feels good to train every day and actually feel like a footballer again. We’ve been at it for a while, so I already feel a lot stronger than at the beginning of the season. It’s men’s football, not youth football anymore. Other choices are made, you have to take the youthfulness out of your system and turn it into an adult game. I think this is a perfect step at this point in my career. As soon as I can make my minutes and show myself again, it will be fine.” It should eventually lead to his ultimate dream: to play together with his brother Timothy.

The career of his brother – who Ajax, Manchester United, Crystal Palace and Fulham ended up at Bayer Leverkusen a little over a year ago – spontaneously puts a smile on Fosu-Mensah’s face. “If you can make your debut against Arsenal at the age of eighteen in a full Old Trafford… That’s not something everyone can say. Phew, I sat with a pounding heart when he stood on the sidelines. I still have those moments sharp in my memory,” he beams. His surname and position quickly evoke comparisons with his brother. Fosu-Mensah shrugs his shoulders about this. “You always walk around with that. I’m just proud. My brother has played Premier League and now plays in Bundesliga. I just always try to show myself, do my best and show my qualities. What people think has relatively little influence. I live from day to day, but of course I have ambitions.”